Home > Resources > The Base Of The Mountain: Rural Alternative School Of Miranda, Cauca

THE BASE OF THE MOUNTAIN

The Institutional Peace Program of Universidad del Valle, in partnership with PASO Colombia, conducted a study to systematize the experience of the Rural Alternative School (ERA) in Miranda, Cauca. The results of this study are presented in the publication The Base of the Mountain: Rural Alternative School of Miranda, Cauca, which explores the development of the ERA, the lessons learned, as well as the collaborative work developed by ex-combatants, campesinos (peasant farmers), and partner institutions that, for a period of three years, have been working to promote rural development and strengthen peace governance in their territories. 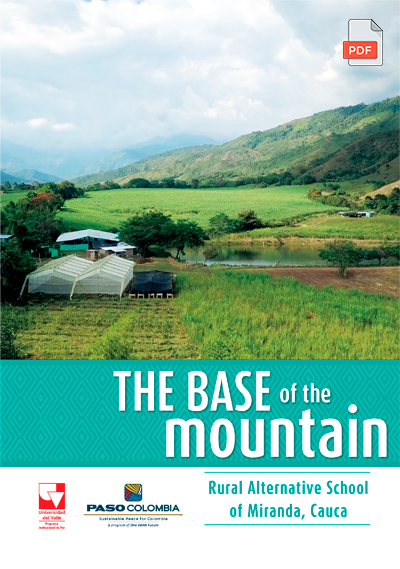 While travelling across the mountains of Colombia and exploring with campesinos the new economic opportunities that could be generated by the peace agreement under negotiation between the government and FARC in Havana, we —PASO Colombia’s team members— could already perceive the enthusiasm that this process was arousing among rural inhabitants. We could observe how new paths of hope began to open up among mothers, victims, youths, families, and social organizations that had witnessed the war for half a century.

In the case of Miranda, Cauca, the mountains had been, for years, the natural environment for FARC-EP combatants and the poorest peasants, who were far removed from economic opportunities. Those who lived in the flatlands viewed these mountains with fear, whereas those who lived in the mountains viewed the plain with distrust, a place where public institutions, large agro-industries, infrastructure facilities, and economic opportunities were present. They felt excluded and abandoned by all the public and private actors who had fled the conflict in their region.

Today, we are very pleased to see how people undergoing a reincorporation process came down from the mountains to work side by side with campesinos from La Elvira Peasant Reserve Zone, in order to build an ERA. Teamwork has changed the way we all perceive things. In the process of growing food, campesinos, reincorporated ex-combatants, indigenous communities, partner companies, government agencies, and international organizations, have recognized each other as brothers. We have new friends and we have been able to see how people who used to look at each other with distrust are now building bonds of solidarity.

The ERA of Miranda has become a collaborative platform where the efforts of those who had been separated by war converge. This new environment of solidarity has allowed the ERA to generate opportunities for inclusive development, becoming a national model to build territorial peace. Its collective infrastructure benefits the neighboring populations, and the projects developed are learning and collaboration scenarios for families committed to eradicating coca crops, and for indigenous farmers and campesinos, thus helping to transform local agricultural practices and making them more sustainable.

The ERA of Miranda was the seed for a peacebuilding model that is now bearing fruit in 21 municipalities nationwide. Throughout this document, the reader will find a journey through moments, shared knowledge, and wisdom, and an insightful analysis of what has been achieved through the «learn-by-doing» method, in which participants learn “how to be and how to do” by working on collective productive projects. This model is based on the premise that the best way to “make things happen” is through a collaborative effort that leverages the assets of each territory, the most important of which is its people.

We thank the Institutional Peace Program of Universidad del Valle, that developed the systematization study presented in this document, whose results are expected to be a contribution to all those who work in peacebuilding.

We honor the memory of Luis Carlos Yunda, a reincorporated ERA student, who was killed and returned to the top of the mountain, this time a higher and peaceful one.