Details Of The Contingency Plan To Support Ex-Coca Grower Families

Nearly 99,000 Colombian families have agreed to eradicate their illicit crops and replace them with legal alternatives, with financial support and technical assistance from the national government. These families are registered in the National Comprehensive Program for the Substitution of Illicit Crops (PNIS, for its acronym in Spanish), created as part of the Final Agreement to End Armed Conflict and Build a Lasting Peace.

Delays in the implementation of PNIS have increased the vulnerability of the families linked to it, as well as reduced their trust in the program. For this reason, PASO Colombia has developed a Contingency Plan that bridges the gap between phases of PNIS. The Contingency Plan to Support Ex-coca Grower Families is funded by the UN Multipartner Trust Fund for Sustaining Peace in Colombia, and implemented by PASO Colombia in coordination with the Presidential Office for Stabilization and Consolidation. It provides families an income during the initial four months after they decide to replace their illicit crops. The income is provided in exchange for their participation in community work and on-the-job training in preparation for their ongoing participation in PNIS and beyond. The plan also provides technical assistance and access to social networks that develop productive, commercial and organizational skills, and strengthen infrastructures within the territories where participants reside.

The Contingency Plan has been implemented with 1,967 families that reside in 10 municipalities throughout Colombia: 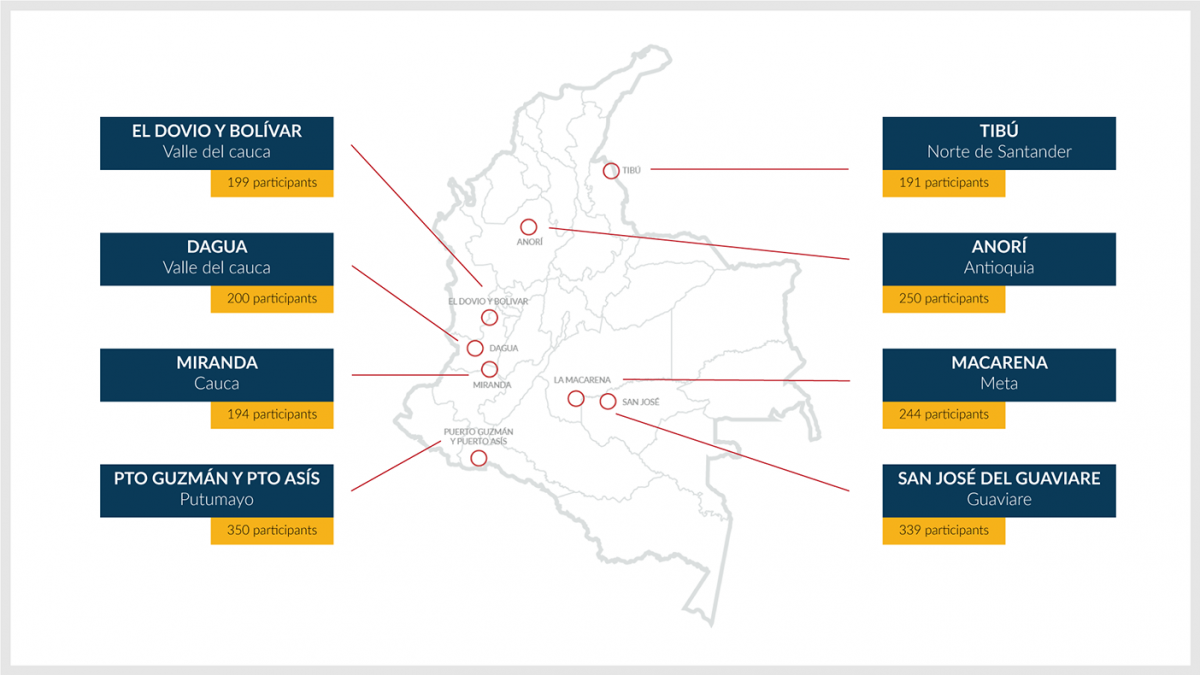 In consultation with the communities, the contingency plan helps to establish strategic production chains, infrastructures, and commercialization channels within each territory to support the sustainability of legal economies. To advance in the objectives prioritized within the communities, each participant chooses to join one of the following lines of action during the 4 months that the Contingency Plan lasts:

Under the "learn by doing" modality that PASO Colombia has developed in its Rural Alternative Schools (ERAs) project, each line of action provides on-the-job training, as well as technical assistance tailored to the needs of each specific endeavor. Participants receive an income in exchange for their work and training once they have demonstrated they have developed and put into practice the corresponding skills.

All of the above is carried out under established gender, environmental and sustainable development approaches.